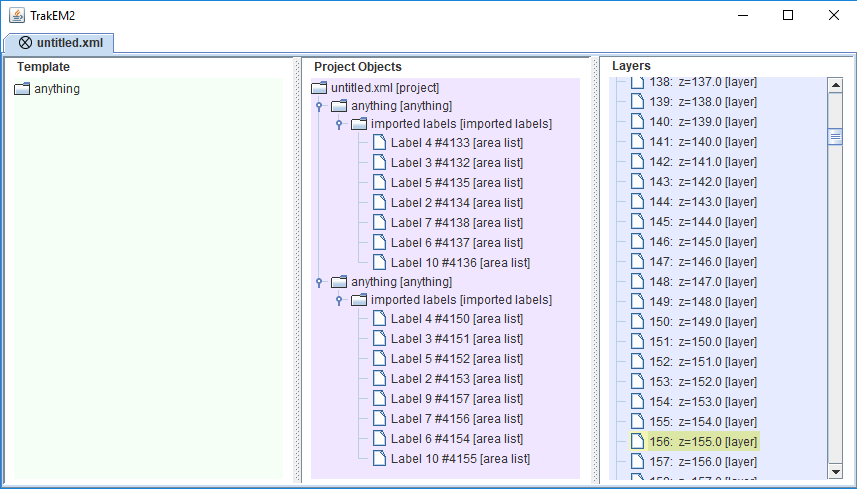 Some projects might need in a later project step a realignment of the image data (after segmentations have been done already) to correct for so far overlooked smaller alignment errors. It is possible to recalculate the Amira labels to the new image transformations in TrakEM2 (assumed you have done the initial image alignment in TrakEM2), so that all so far performed segmenting work is not lost.

To do so, the label data first needs to be loaded back onto the original alignment, in order to send it in a second step to a sibling project, containing the new alignment of the image files. The Amira label import can be done relatively straight forward in small to medium sized projects, but can lead to system crashes in case of large data sets due to the amount of RAM needed for this process.

This issue can however be easily solved by the following procedure:

4. Merge the labels: As TrakEM2 reads out the different channels in each substack, all parts of the same label have the same name (e.g. Label 1 (area_list)). Mark all of them (holding shift while clicking on the labels in the Z space list) and merge them (right click —> merge). Final result are again single files per label.

Hi, I am Stefan Fischer. I am biologist at the University of Tübingen and Head of Tübingen Structural Microscopy Core Facility (TSM). My methodological interest is set on electron microscopy. Furthermore I do focus on 3D techniques, be it on basis of semi-thin sections (LM), Ultra-thin sections (ssTEM) and also MicroCT data. For that reason I developed a strong interest in open source software packages and image analysis in order to automate (or semi-automate) some of the tedious parts of my workflows.